Well, time for the first game status report, huh? This one was actually posted to the MTS forum, but I figured it’s gonna get buried quickly so I’m copying it over. I present to you, one of the protagonists of my Sims world: Inferno…. and his messed up adventures.

He is new in the city. He moved into a small apartment, and when the neighbours all came to greet him, he had a special surprise for them… He set the apartment on fire with them inside. They all ran away. Committed insurance fraud while he was at it!

After cleaning up a little (though leaving one of the completely burnt out rooms be for now), he went to explore the city and surrounding towns a bit. Met a nice and funny girl at a library, though socialising is a bit hard when everyone gets really tense around you all the time. (I gave him the Creepy custom trait.) They had a nice chat while the second floor was burning down, and before he left, he got into a fight with the snobbish leader of the Good Timers club.

Out of pure spite, my Sim went to the Good Timers club’s gathering place, a small bar in Windenburg, and started a fire in the restroom. Three people died. But the club leader made it out alive. He’ll get him eventually…

To get his mind off things, he went on a date with his new-found girlfriend, Helena.

Back home, he got a bit bored and decided to just start singing for a couple of hours. An idea was born! He bought a guitar and practiced until the neighbours came to shut him up (which he ignored). Thanks to Get Together, he then started a death metal band called Purgatory. I made custom band shirts and even a club flag for them! One of the members is the one neighbour he hasn’t made his enemy yet, and the third member is the lady he met at the library.

He rebuilt the burnt out room in his apartment into a band practice room. 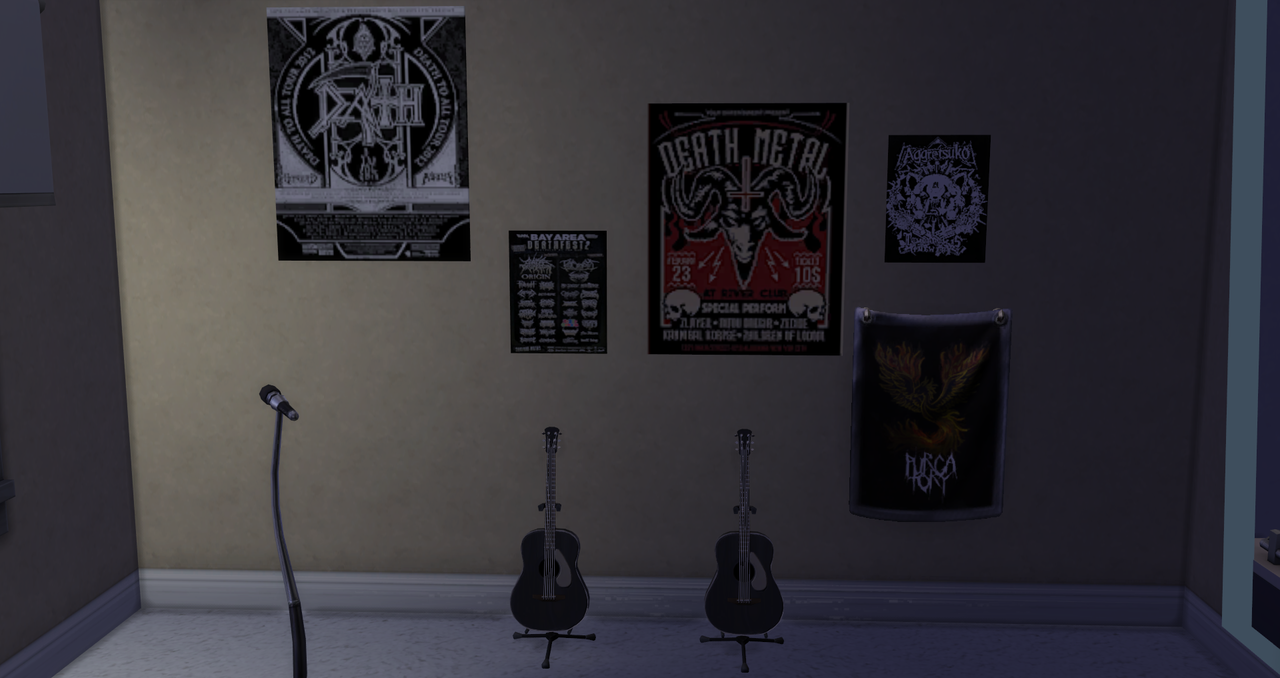 His next objective was to get a bit of fame, so he went to the more glamorous locations. His girlfriend invited him to meet a celebrity at the Orchid lounge. He spotted the celebrity, who was surrounded by fans and paparazzi. My Sim walked straight up to him and told him a gross joke. Hanging out with celebrities is boring, however, so he convinced the bouncer to let him into the VIP lounge, where he took a few selfies before burning it down. One person died.

Visiting the Stargazer Lounge soon after, he and his band performed all evening, earning some nice tips and also his Notable Newcomer rank. Too bad that a celebrity showed up at some point and stole the show. My Sim almost got into a fight with some brick shithouse fan that evening.

Unfortunately, the library girl kept either leaving early or skipping the band meetings, so he met up with her at the Old Quarter Inn bar and kicked her out. It was a shame, cause they kind of had a fling of sorts going on.

He’s currently looking for a new third band member, but it’s tough because with his explosive temper he has made more enemies than friends by now. 🤔

Please note that I don’t take requests for new mods/content or features. You can leave me comments about stuff you’d like to see, but it’s not guaranteed that I’ll actually make it.

Also note: I won’t be giving out my old tank heads mod since the meshes are taken from a different video game. I’m however working on making versions with my own meshes and will release them soon.